It's a wrap! I'm talking about Project Green Light's movie "Feast", of course. Our movie is still in production. But I watched the latest episode of PGL the other night, and had some observations about it. Chris Moore specifically.

God, what a crybaby! He's more worried about being left out of a lousy screening of a rough cut of the movie than the success of the movie itself! He's as nutty as that runaway bride gal, Jennifer Wilbanks. 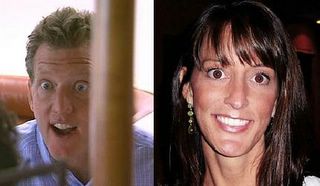 Chris "Psycho Eyes" Moore and Jen "Perpetually Surprised" Wilbanks
It looks like Director John Gulager managed to pull it off, at least as well as can be expected under extreme conditions. Everything was rushed, underfunded, and over-managed to an amazing degree, and yet it looks as if they may have filmed what can become a decent horror genre movie.

Yeah, a lot depends on the editing process. And the recent Disney-Miramax divorce might affect the film's eventual distribution. But if the movie IS released, I'll be willing to go see it. Especially to see the results of this weekly reality series that I've been following for way too many weeks.

So, after watching this week's episode (next Thursday is the season finale), I was still mesmerized by Chris "I Took Way Too Much Acid In College" Moore's eyes, and I started thinking...

I thought, wouldn't it be funny if Chris Moore and Jennifer "Extremely Bug-eyed Insane Runaway Bride" Wilbanks married and had a child? I wondered what their offspring might look like.

Well, if you know me, you know I'll have a suggestion. Take a good look at the cute lil' picture below, and tell me I'm right. 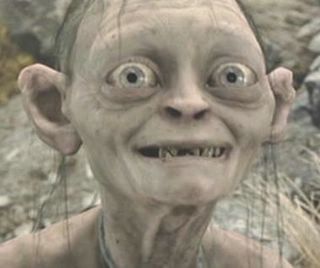 ROFLMAO!!! Has anyone else read this yet? OmG. Poor Chris. LMAO!!