Ever have a sleepless night, and the next day you catch yourself having little mini-dreams with your eyes open? That's what this movie is like. Reality is subjective and sanity is doubtful. "The Machinist" is one of those movies, like "Memento", where things aren't always what they seem. 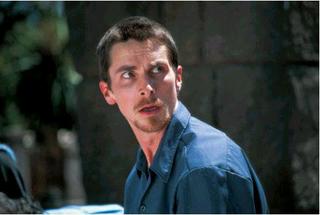 Christian Bale, the new "Batman" and former "American Psycho", dropped an astounding 63 pounds to resemble a death-camp appearing skeleton somewhere on the shy side of 120. He's lost in a nightmare of intrigue, mystery, and paranoia that make for a really creepy yet compelling movie. I don't want to give too much away; some of the IMDB info contains spoilers, so I recommend you just watch this flick cold, then read about it afterwards.

Jennifer Jason Leigh is cast in a somewhat minor supporting role (yeah, we've all seen your boobs by now, Jen...can you please put them away for good?), but essentially the co-star of this movie is a creepy feeling that sanity is slipping away. This movie DOES have a conclusion that wraps the story up, so don't start worrying while you watch it (like me) that you'll sit through the whole thing and it'll leave you hanging at the end. It was filmed in Spain, but English-speaking, hence the name El Maquinista.

Oh, and can please somebody tell me why "Magnolia" is supposed to be so frickin' good? I've watched that piece of shit at least three times and STILL don't get it! Yeah, it rains frogs at the end. Wow! Quick, somebody dump a truckload of awards on P.T. Anderson! Fucking wanker...
Posted by CT Bob at Thursday, July 07, 2005