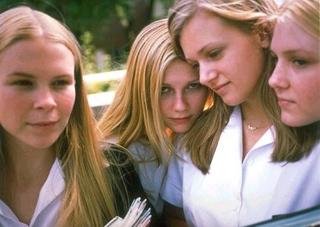 "The Virgin Suicides"
Sophia Coppola's 1999 flick stars Kathleen Turner, James Woods and Kirsten Dunst. Nostalgic (to me, having grown up in the '70's), funny, hopeful and tragic, it's a complex look at the life of five teenaged sisters and the people who interact with them. After one of the sisters attempts suicide early on, this bit of dialogue effectively sums up the movie:

Doctor: What are you doing here, honey? You're
not even old enough to know how bad life gets.
Cecilia: Obviously, Doctor, you've never been
a 13-year-old girl.

That pretty much says it all.

"Star Wars: Episode III Revenge of the Sith"
OK, I had to see this flick, even though I'm not a huge Star Wars fan. This probably has something to do with the fact that I was, in actuality, dating girls when the original "Star Wars" movie was released back in 1977. I guess the idea of obsessing over intergalactic warfare paled in comparison to making out with young high school girls in the back seat of my beloved but short-lived 1970 red Dodge Dart...and I was only 38 at the time! LOL!! OMG!!! WTF!!!11!1ONE!

So, it wasn't a big deal to me to wait a month or two before seeing this movie. Overall, I liked it. Some of the dialogue in Sith (like most of the series) was silly; but the general effect was of sinister darkness. Kevin Smith's famous online review of the movie was pretty much spot-on, except for all the fan-boy blathering he did about how great it was. 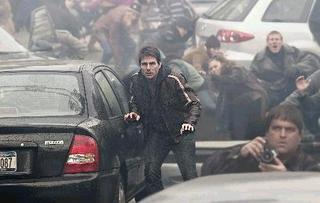 "War Of The Worlds"
Scary. Good fun. Great CGI. Those Martians were right bastards if you ask me. But you didn't. So I volunteered my opinion. Whether you wanted it or not. Haha. 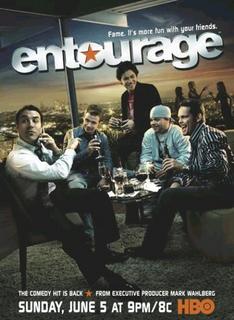 And my current favorite TV sitcom, "Entourage", is developing into a sharply funny show. Jeremy Piven is really becoming the perfect sleazy Hollywood agent. The writing is getting better, too. Love all the cameos. And Kevin Dillon frickin' KILLS me! Catch this show on HBO.

That's it. Not much news on the projects I'm working on; Ant's on vacation, and it's fucking summertime...I'm on my boat just about every second I'm not working. We only got about 10 more weeks before the weather starts getting a bit sguirrely. Then I'll have all winter to work on this stuff!
Posted by CT Bob at Wednesday, July 27, 2005

I liked Revenge of the Sith. But I thought War of the Worlds was walking shit. Well, it was okay until about half way through. Then it just got really stupid.

I thought war of the worlds was fucking top class,brought an old film back into our time?