Another film being shot locally

My friend Maura posted this on My Left Nutmeg, a local political blog. This is another Hollywood movie being filmed here in Connecticut. We're becoming the Vancouver of New England! I thought it would be good to repost here. Forgive the sloppy formatting; I'm too lazy to fix it. Enjoy!

Well, the shoot got cancelled last Thursday, but the crew is back today -- and they decided to prominently feature my house and my next door-neighbor's house!

The production crew arrived at 6 this morning and rang our doorbell at 6:40, asking us to move our cars out of the driveway.  They replaced them with these: 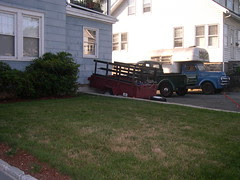 It's really exciting -- the production crew are focusing on our house and our next door neighbor's, so we've gotten our tree pruned, fake blooms put on our rhododendrons, and hanging laundry in our side yard.

I'll put up more photos later this morning as filming commences, and I've posted a few below the jump.  (Click all to enlarge.) 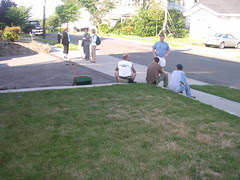 Production crew hanging out in my driveway 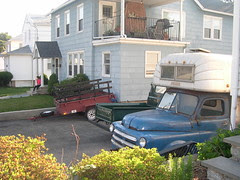 Vintage trucks in my driveway.  (That's my sister-in-law on our front steps. 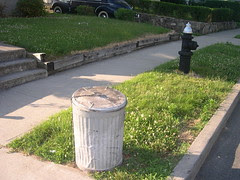 They repainted our fire hydrant from yellow to black and silver, and they sprinkled the street with vintage metal garbage cans. 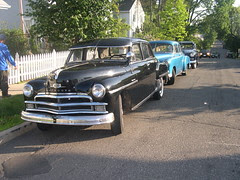 The street is lined with vintage cars. 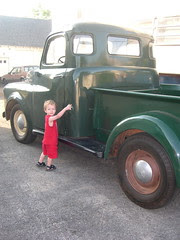 My nephew Sean explores the truck in our driveway. 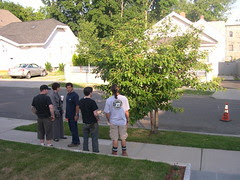 The landscaping crew discusses how best to prune our tree. 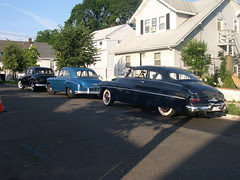 Vintage cars across my street.

Great!
Thank you for details and photos about " Revolutionary Road"

Please heep us informed about if you can , of course!

Great!
Thank you for details and photos about " Revolutionary Road"

Please keep us informed about if you can , of course!

So if we see a figure standing in the front window of the house with a large sign saying "Hello Mom" we'll know who it is !!

I really enjoyed your pics from Revolutionary Road. Did you take any of Kate Winslet and Leonardo DiCaprio? will you be posting more of these type of pics? The picture quality are great btw. Thanks!

Gazza, if they do wake you up at 6AM, I hope they have a camera so they can shoot "Angry Gaz". Sounds like a mythical beast or something.

Rose & April, I don't have any more info right now. The post and pictures were done by a friend who lives about 25 miles away where they're shooting the scene. If she posts anything else, I'll try to repost it here.

Byron, see above. A sign in front of my house probably won't be visible this far away (unless they have a really cool telephoto lens or something).