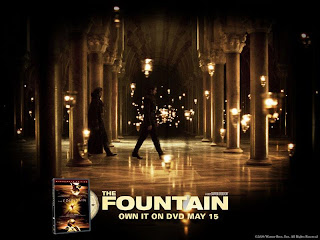 The Fountain stars Hugh Jackman and Rachel Weisz in a richly textured story of love transceding time. The plot is somewhat confusing at times, varying from the year 1500 to present day to 500 years in the future; and the ending is purposefully ambiguous, but it's a great flick to watch just for the joy of a true cinematic experience.

Anyone familiar with Aronofsky's work will recognize his use of redundant images and sounds. Whereas "Pi" was a film about the mind, and "Requiem..." was about the body, "The Fountain" explores the human heart.

Hollywood veteran Ellen Burstyn scores with a good supporting role, too. Overall, a visually stunning movie with great performances and a story that begs contemplation afterwards. Don't expect to be spoon-fed a Hollywood plot with THIS flick!
Posted by CT Bob at Tuesday, June 05, 2007

my daughter bought this dvd,i'll have to be in the mood to watch it,i believe its verry arty?

You wouldn't watch this flick if you're in the mood for a lot of action.