I wanted to see "HHGTTG" tonight!

Last night I managed to get a reasonable night's sleep, uninterrupted by any anxieties in the form of arrogant movie stars or unfinished scripts. For the most part.

Then a goddamned fire truck blasted by my house at 5:16 this morning, cranking the siren AND the air horn for good effect. I can't win.

I finished logging the footage today, and did some minor prep work for Monday's shoot. Believe it or not, I'm fairly relaxed going into this shoot. Sure, I'd like to work out some audio issues, but the scenes we're doing are gonna be so much fun it'll be worth the hassles. I probably won't need Production Van 2000; I can load most of the stuff in my car. Trust me, the less mileage I put on that rattle wagon, the better!

I'm planning on buying a wireless lavalier mic ASAP; I'm going cheap, but with a good name. The Audio Technica model ATW-201/L has a receiver, transmitter, and lavalier mic, all for under $125 online. I don't think I'll be able to buy it until sometime before our next project, so we're stuck with what we have for now. We'll manage to make it work. 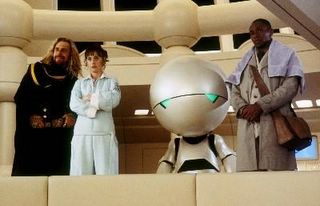 Cast of THHGTTG
Joyce got called into work tonight, so we cancelled plans to see "The Hitchhiker's Guide to the Galaxy". I'm a big fan of Doublas Adams's books and the excellent BBC radio plays, and I'm really looking forward to seeing the flick. I think casting the perfectly droll Alan Rickman as the voice of "Marvin" was BRILLIANT!
Posted by CT Bob at Friday, April 29, 2005

What is it about this movie!? I've been seeing this everywhere! LOL For some reason I can't seem to get pumped up about it.

I guess I'll have to read the book first.

The book is an easy read, lots of fun, humor that's reminiscent of "Monty Python". In fact, Douglas Adams (the author) co-wrote with the Pythons. I've been a fan for more than 20 years...there was the BBC radio plays, a rather poor TV series, and now a hopefully good movie.

They really needed to wait until CGI was perfected to make this movie; there's just too much to encompass using old-style Hollywood FX.