Ant and I had a production meeting today. We covered a lot of ground.

We started with practical stuff, like perfecting the fog chiller to enhance the effect; getting equipment together, like lights, specialty camera mounts, and stingers (extension cords); and working out audio techniques. 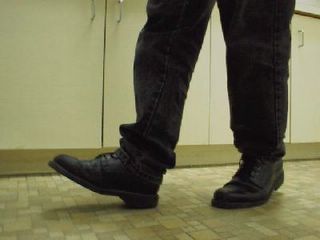 The audio issue was especially troubling, because we don't have a lot of good audio stuff. We decided to use lavalier mics on the actors, and run them through an equalizer to balance and mix them, then input them into the primary camera's audio input. It's definitely a kludgey fix, but we don't have a DAT recorder or mini-disc system. This way we'll get reasonably decent audio without having to go through a lot of hassle...

...or expense. Expense is a big issue. Huge, actually. Prohibitive.

Also, we don't want to use a shotgun mic on that echo-y set...besides, we'd need yet ANOTHER crew member to operate the boom, and there just ain't enough room in there for more than seven of us (2 actors, 3 cameras, 2 crew).

Next was paperwork. We went over scripts and shot lists. We finalized (more or less) all the camera angles and camera locations; we made lists of items we needed on shoot day; and we compiled a menu for the actors and crew.

I'm learning first hand that creativity is only a portion of what's required to make a movie. You also have to be organized, persistant, flexible, innovative, patient, and confident. Otherwise you'll never get it done.

All told, our production meeting was three hours of "shit...am I forgetting anything?"

Tomorrow rehearsals and test shoot at the studio. That's after I have to drive up to Cape Cod and back (400+ miles)...should be fun.
Posted by CT Bob at Sunday, April 17, 2005