I just screened "Be Cool", the sequal to Elmore Leonard's novel/film "Get Shorty", starring John Travolta, Uma Thurmann, Vince Vaughn, Harvey Keitel, and a slew of other Hollywood names. 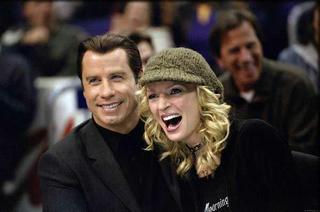 The movie is basically a version of "Get Shorty" except about the music business instead of the movies. Much like the first movie, it's filled with smug inside references and silly cameos; there are just enough laughs to maintain your interest, but untimately some of the performances damage the overall effect. Vaughn's awful representation of a white "playa'" compares unfavorably with Gary Oldman's electric portrayal of Drexl Spivey in "True Romance"; in a movie as derivative as "Be Cool", you'd think he'd be better prepared for his role.

Also, there are scenes that are directly lifted from other flicks, such as "Pulp Fiction". Whether these are intentional or not, they are so obvious that they tend to jolt you out of the movie. Don't expect to work too hard at figuring out the references; you can possess a movie I.Q. well below triple digits and still "get" all the obvious connections.

Another thing that kept me from getting totally involved in the story was the nagging awareness that Travolta, while not as obviously psychotic as Tom Cruise, is a senior member of the "Xenu Mafia", and every time he's on the screen I'm reminded of some of the disturbing policies and actions of the "church" of Scientology. I'm cool with people's beliefs, even if they differ significantly from mine; but this nutty organization is essentially a "legal" pyramid scheme and toxic psuedo-science disguised as a tax-exempt religion. See www.clambake.org for lots of humorous info on this "church" that the brain-washed disciples of L. Ron Hubbard don't want you to see.

BTW, that last paragraph wasn't me talking; it was my "Thetan clusters". They're evil and interfere with my ability to achive clarity. They made me type this. Don't sue me or kill me please, Scientologists.
Posted by CT Bob at Saturday, July 09, 2005

I've had absolutely NO interest in watching this movie whatsoever. It reeks of stink bombs.

Hey! Lay off of Tom Cruise. The pour soul has enough on his plate to deal with... like making sure his child bride doesn't take a piss without proper supervision.

He's such a wanker.

You're right about that movie...I wouldn'ta saw it except for free.

I'm still waiting for the Scientology Police to bust down my door in the middle of some night, tie me to a chair and make me watch "Battlefield Earth" over and over!

I watched the movie coz i liked the first,kinda the same,few funny jokes but nothing new,i am a Travolta fan coz he plays a great hardcase!