Well, the first two rounds of the tournement are over, and we're down from 64 teams to 16, with two more weekends of basketball to go. The first place seeds in all four brackets are still in; the UConn Huskies, Duke Blue Smurfs, Memphis Belles, and Villanova Dung Beetles (I'm not 100% sure of the team names on those last three) are all well on their way to Final Four berths. 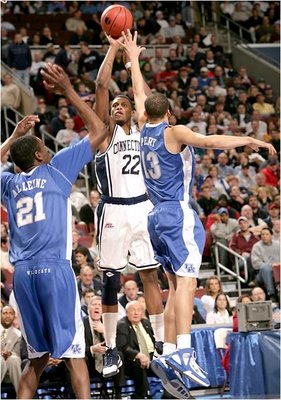 Today my wife called me from work to let me know that going into the Sweet Sixteen round I'm leading the prize pool (her boss is running it). So far I'm doing about 75%, which is good enough for now. The big games start next weekend, and I'm hoping that I continue with my percentage; there's only one game where I don't have either team selected, and in the two other games where I have one team picked, they're both big favorites. What that means is that out of the 8 games next weekend, I definitely will win 5 of them and have the favorite in 2 more.

Joyce already told me that I have to buy her dinner if I win.
Posted by CT Bob at Monday, March 20, 2006