Tonight I was asked to fill in to run the camera at a hockey game. I figured, "hey, why not?" 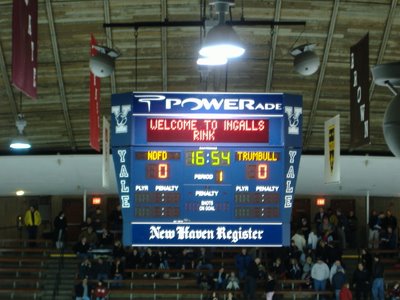 So I drove to the Yale rink, and met up with Vince Cerrillo, the hockey announcer. 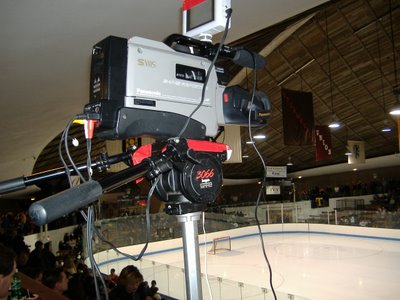 The camera was set up about 8 feet up, so it would have an unobstructed view of the ice. They stacked up two pairs of milk crates, so I had to tape the entire game standing on top of this rickety setup. 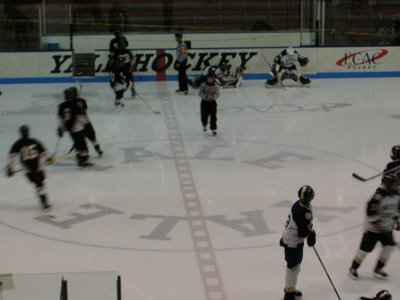 The two teams were Notre Dame (Fairfield) and Trumbull. I played football against Trumbull about 30 years ago, when I was a tackle at Milford High School (Class of '77). I remember (vaguely) one time after a play ended I was on the ground, and some gutless bastard kicked me in my helmet. Rang my bells something fierce.

I was dizzy as hell for the next 10 minutes. I was playing both offense and defense, so I couldn't take a break...I almost threw up on the field.

I never forget about that. So when Notre Dame beat Trumbull in the overtime period tonight, I was happy. Even though it was hockey, not football. 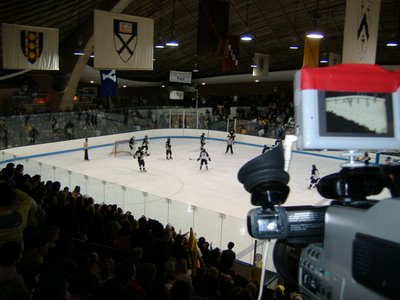 It's pretty damned difficult shooting a hockey game with a single camera! By the 3rd period my neck was killing me, my back was sore, and my feet were tired from balancing on the milk crates. The overtime didn't help.

But it was cool...and I'll get to see it on Public Access in a week, so I'll post an update about how it looks.
Posted by CT Bob at Wednesday, March 15, 2006

I don't know if they were wussy; I was balanced about three feet up on these plastic pieces of shit that threatened to collapse and send me down over the rail into the crowd. To me, they were cheap, flimsy, dangerous, and probably not strong enough to support me properly...

...yeah, I guess they were wussy after all. LOL

Oh, don't misunderstand me - I heartily applaud your refusal to be put off by the lack of a proper platform! What surprised me was the presence of milk crates in such a macho arena - beer crates, yes - isn't there a joke that goes: "I went to a fight and a hockey match broke out"? You'll be telling me next that hockey players are pussycats :)

I just typed a big comment here, but it didn't go through, because Blogger is fucking up something awful lately. So just assume that I posted a witty reply and chuckle to yourself.