Never, EVER, piss these guys off...

Some people you just don't mess with:

And then there's Trey Parker and Matt Stone. You do NOT want to make it onto these guy's shit list.

In a widely publicized story, Isaac Hayes (the voice of "Chef") recently left his gig on "South Park" (otherwise known as "The Easiest Job In Show Business"), claiming he didn't like the way they disrespected religion. He quit after the rerun episode on Scientology was taken off the schedule after pressure from Tom Cruise. It apparently didn't bother Hayes, a longtime Scientologist, when the show lampooned every other religion over the years. 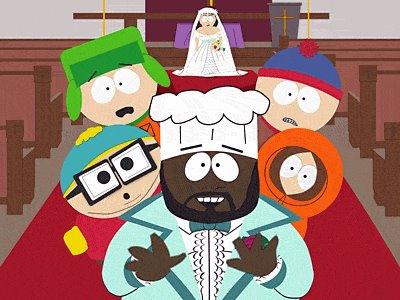 But Scientologists are famous for their complete lack of anything resembling the ability to laugh at themselves. Talk about a joyless way to live..."Don't laugh, Xenu might be watching!"

Parker and Stone, while not mentioning Scientology by name, portrayed Chef as being brainwashed into becoming a child molester by something called the "Super Adventure Club". Anyone familiar with the South Park episode on Scientology will definitely get the jokes.

Chef is punished by Parker and Stone by being killed in the following ways:

Catching on fire,
then falling off a cliff,
then being impaled on a branch,
then being mauled by a lion,
then suffering repeated gunshots by people trying to kill the lion,
and finally being dismembered by a grizzly bear and the lion.

And then his corpse crapped his pants.

The show ended somewhat ambiguously, with the door left open for a Darth Vader-like Chef possibly making another appearance. 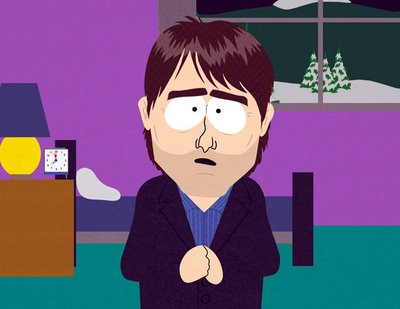 Let's see what that whinging asshole Tom Cruise has to say about THIS episode.

And to learn more about what a travesty Scientology actually is, check out Operation Clambake.

(props to Woody Allen for that quote from "Bananas")
Posted by CT Bob at Thursday, March 23, 2006

Hmmm.. I guess singing about sweaty chocolate balls is a-ok, but poking fun at scientology, and Hayes grows a conscience?

Whatevs. I'm sure Flava Flav is looking for some work now.

Cherry Moon, it isn't any religion he objects to, just Scientology. He didn't open his stupid mouth to complain when they satirized Jesus Christ and God, including the "Bloody Mary" episode that wasn't aired in the U.S., but is downloadable, plus the Mormons, Moses, the Pope, etc. It's obvious the guy is being programmed by his cult leaders.

Flava Flav! How much did you enjoy "Flavor of Love"? I thought it was AWESOME!

Gaz, yeah Kenny died in something like 80 episodes. They finally stopped killing him when the joke got old...not that THAT ever stopped them before.