An "Indie" isn't always a film 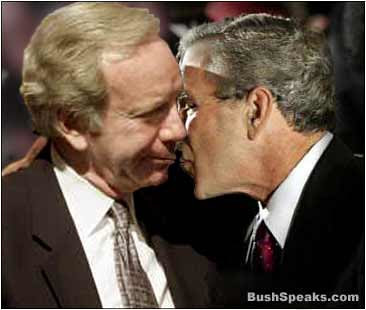 In this article in yesterday's Connecticut Post, Senator Lieberman hasn't ruled out a run as an independent candidate if he loses the Democratic primary.

"Win or lose the convention, Lieberman and Lamont will likely face off in a primary on Aug. 8.

The loser of that contest would have until 4 p.m. the next day to file a petition with the secretary of the state, including signatures from at least 7,500 registered voters, to have his name on the November ballot as an independent candidate."

This makes for an interesting situation...if Joe loses on August 8th, he has at most about 20 hours to get the requisite amount of signatures.

7,500 is a LOT of signatures...there's very little chance that the Senator's election staff can mobilize, collect, assemble and then turn in that many signatures in that amount of time. Which means it's likely that either Joe will sit out the 2006 election if he doesn't win the primary, or he will remain in the race as in independent with signatures that will likely have been collected while he was running as a Democrat!

In my opinion that would be unethical at the very least, and election fraud at most. Either way it would probably be fatal to Lieberman's election chances if publicized. Or, Lieberman can cash in his chips right now, register as the Republican we all know he is, and make an appearance at the May 13th GOP convention. At least then I'd admire his honesty.

ADDITIONALLY: Does anyone know how to determine where Senator Lieberman's campaign contributions come from? I'm thinking along the lines of individual donors lists with political party affiliation details, and corporate/organization donors? It would be interesting to see how many individual and corporate Republican contributions our (current) Democratic Senator has received. Let me know.
Posted by CT Bob at Wednesday, April 12, 2006