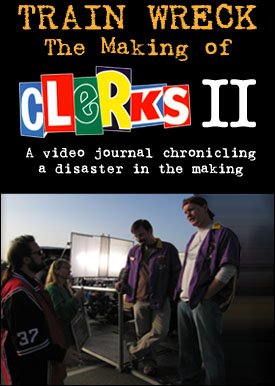 As you may have gathered from reading this blog (all five of you, I think), I'm a fan of the films of Kevin Smith. Ever since Clerks came out, I've enjoyed his weird take on life. Sure, he's not Kubrick or Scorcese (hell, he's barely a director at all), but his films are what they are.

You don't need a film-appreciation degree to figure out Kevin Smith's movies. They're funny, juvenile and unpolished. Like me. That is, except for Jersey Girl...and we forgive you for that one, Kevin.

12 years after Clerks, Smith has come full circle, and gone back to the well for another bucketfull of Clerks; the aptly titled Clerks II. It was previously called "The Passion of the Clerks", which was a lame joke even when it was relatively topical. But at least Clerks can HAVE a sequal; Mel Gibson didn't leave much room for a "Part II" with his flick. Sheesh, good thinking there Mel!

Smith is nothing if not a natural-born promoter, so he's got a great online video blog called Train Wreck...The Making of Clerks II. There are dozens of backstage videos posted, plus easy links to the Clerks II website and Kevin's scandalously honest personal blog My Boring-Ass Life (which is anything but boring, trust me!)

Randal
Dante and Randal are now in their thirties, and still clerking, only now they're at a fast-food place. That's about all you really need to know going in. Oh, and you can count on the usual raw humor that was so charming in Clerks.

This latest epic from the "Federico Fellini of dick-jokes" will open on August 18th.
Posted by CT Bob at Thursday, April 13, 2006