The Big Shoot: Day One

Today was the big shoot.

It turns out that this is "Day One" of the big shoot. Which is fine, as you'll see here. Better fasten your seat belt folks...this is a long ride!

I picked up Chad ("Green"...I'll explain later) and drove to the shoot. We got to the studio around 8AM, and promptly found we were locked out. Anthony called me on the cell phone and said there was a huge line at Dunkin' Donuts, so he'd be a few minutes late with the donuts. Not a problem. Then Paulina said she wanted a bagel. With cream cheese. Okay, maybe it's a problem now. But not really. We just joked about her being the "Bagel Princess", and let it go at that.

A guard finally appeared and let us in the building around 8:20, but after loading in all the equipment we were still too early for the actual studio to be open, so we were waiting in the heated and non-rain-swept hallway instead of outdoors, which was OK. 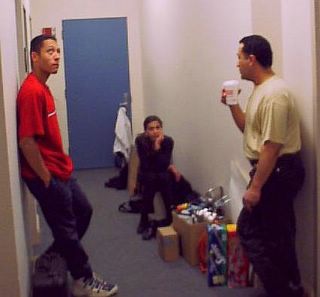 We spent the time doing some blocking and rehearsing, since quite a few scenes were to be shot right there in the hallway. This was the first time the two leads Michael and James met each other, and I was glad to see that they got along great. In fact, because of the way auditions and rehearsals went, most of the cast and crew met each other for the first time at that moment. 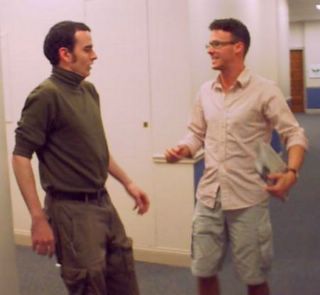 James running into Michael for the first time

At 9 the studio doors opened, and we immediately took over the green room. Over donuts and coffee we briefed the crew on what we'd be working on. Michael wanted a cup of real coffee for a prop, and I told him that there's no NEED for coffee to actually be in his cup; we'd just brewed a pot and it was scalding hot. I said, "You're an actor...ACT like you have coffee in the cup!" He smirked and poured himself a cup anyway. Fine, I thought, no big deal. 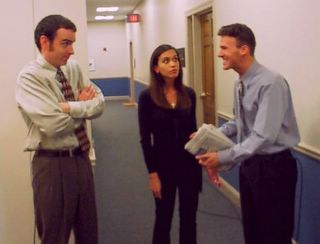 The cast got into their wardrobe and we set up for the shoot. One of the early scenes required James to nearly bump into Michael while he's holding his stupid cup of coffee, with Paulina waiting off-scene to enter. On the second take, James crashed into Michael, demolishing the cup and spraying coffee all over the both of them! Being the sensitive, artistic-type director I am, I resisted saying "I told ya so!", and simply enjoyed a long and somewhat hysterical laugh. Fortunately, my actors aren't the thin skinned types, and they rolled with it and laughed too. 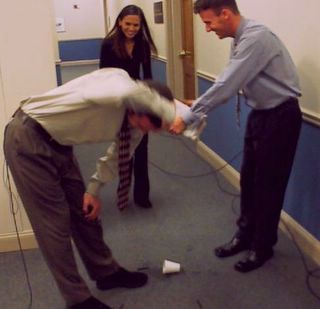 "He spilled my coffee!"

Chad "Red" and Chad "Green" worked grip and gaffer duty, and Chad "Red" also acted as an extra in the hallway. We had to name them that to differentiate between them, so we used their primary wardrobe colors. I don't know what the odds are to get TWO Chads on a five man crew, but considering that it has to be a long shot, I stopped at the 7-11 on the way home and bought a Powerball ticket. 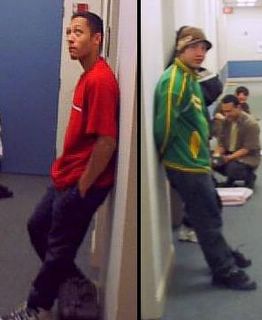 Michael and James continually amazed us with their acting abilities and enthusiasm. I still can't believe how lucky we were to get them! These guys both give 110%, even if the script calls for pratfalls, wearing a suffocating costume, or being tossed around like rag dolls. Guys, you fuckin' RULE!

Paulina also gave a wonderful performance. We told her to act mad at Michael. She asked "how big should I act?" I said BIG. Anthony said "Give it that Latino fire." We did a few takes, and each time she did it bigger and madder and funnier! By the last take I had to clamp my hand over my mouth so I didn't ruin the take by laughing. She's a star! 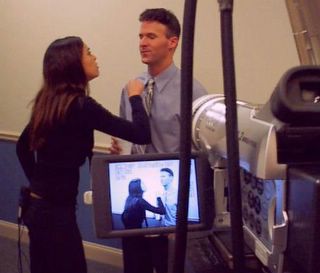 Chad (red) spent last night with us at the studio learning about the mics, so he was a huge help with that, general production assistance, and running the script during the longer dialogue scenes. Chad (green) is a good friend of mine and crewman on my racing sailboat, last week he agreed to be a grip on our movie. He did a great job being "go-to guy", along with using the digital still camera to document the shoot. Paulina also doubled on her camera and helped us immensely as crew.

The audio situation slowed down things. We didn't have wireless mics, and the lavs that we used weren't top notch by any means...we pretty much had to reshoot some takes because I heard too much static through the monitor headset. Our actors were always tripping over the cables, and one take of Paulina poking her finger into Michael's chest sounded like civil war artillery in my headset, because she managed to nail the mic that we taped under his shirt with her finger! 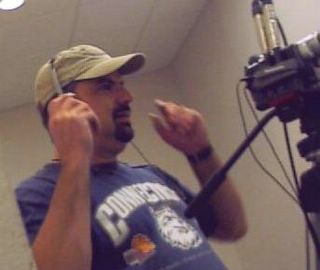 Me, deafened by Paulina's vigorous poking!

I'm sure that we'll manage to get better sound than what we'd get by using the on-camera mics, but I know we can do better, and maybe soon I'll spring for a cheap pair of wireless mics and a shotgun mic. Probably $400-500 will get us stuff that'll do the trick acceptably well. Not only will it sound better, but it'll save TIME and EFFORT. That's the ticket!

We broke for lunch just after noon, and I spoke with the studio manager. She let me know that they had to close at 2:30, which gave us less than 2 hours of shooting time left. I went back to our crew and explained that we could kill ourselves, or plan on coming back ASAP to finish the taping. Everyone was thrilled with the work we'd done so far, and agreed to come back in 10 days and finish the thing (except for some minor additional footage that can be done anytime).

After lunch we finished the hallway and elevator scenes. Anthony did a hysterical cameo in his own movie by playing a nonplussed Hispanic janitor. I can't wait to see the "rushes" on Monday...that's when we have the editing equipment reserved, so we can download from mini-DV onto VHS or DVD to study what we've got so far. 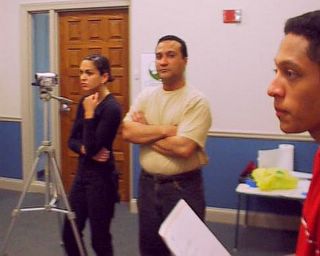 You know what's cool? I didn't forget a SINGLE FUCKING THING! We had so much junk packed into the production van that basically, anytime somebody needed something, we either had it right there in the studio, or we ran out to the van. All that worry paid off, 'cause we had everything we needed.

So we packed up around 2:15, after a good four hours of shooting. We've probably got another four or so left, but we're getting there, and next time we'll be shooting in a much more controllable space. We'll even get to use our fog machine!

And you had energy when the day was over to blog all that? That's amazing.

And good luck with that fog machine.

Thanks Jane! Yeah, because it was a fairly short day I still had the juice to post a detailed account of the day's events. Not to mention that I managed to get a surprisingly good night's rest beforehand.

Also, I'm sure the fact that things went so well helped my enthusiasm. If the shoot ran way overtime without any chance to make up for it, I probably would've forgone undating my blog in favor of a close encounter with a large calibur handgun!

I have to admit something Jane...the fact that I know you're reading my blog makes me want to do an especially good job; I almost feel like I'm gonna be graded on my results or something. Of course I'm just being absurd.

I hope you don't mind though; it actually helps! :)

Of course you will do a good job. A GREAT job. I expect nothing less!

(* German: That which does not kill me, makes me strong)