I'm a bit more lucid than I was last night, so maybe I'll make more sense tonight. But don't get your hopes up.

First, I moved the hit counter from the top of the page to below all the stuff in the right hand column. I thought it was a bit distracting right up there, not to mention depressing to me every time I visit this blog and see it only incremented a couple of digits since the last time I was here.

If it doesn't start picking up soon, I'm going to get rid of it. I don't need it reminding me how dull and uninteresting I must be to people.

I have friends for that.

Enough with the stupid jokes already. Sheesh, even I'M getting annoyed at myself. Maybe I'm in this weird mood because A&E is showing non-stop biographies of serial killers tonight, and after three hours of this nonsense I'm beginning to lose my will to live. I've got to get in the habit of shutting off the TV when I'm trying to get work done on the computer.

By the way, that Ted Bundy was quite the naughty young lad. 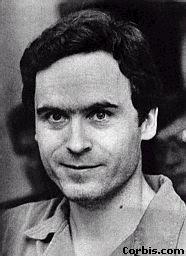 Our actors have the scripts to read over the weekend. I think. Let me put it this way; they have my script. One actor didn't get Ant's yet, and he is now incommunicado. Actually, he's in Pennsylvania, which is basically the same thing. We'll hear from him on Monday.

We were supposed to have a script meeting tonight, to go over our final drafts and finalize the shot lists. Plus we wanted to work on some production stuff, like the fog chiller and costuming. But Ant had to cancel, so maybe we'll meet this weekend. Monday is the only rehearsal we got, so we need to get our shit together ASAP. Probably on Sunday.

Also, today I worked the camera for "Niki@Noon" at the studio, and spoke with the technical director about how to mix two lavalier mics into a single input for audio recording. There's a little mixer that fits right on the camera, but it requires you to monitor the sound with headphones. That's one more detail that will need to be worked out this week. Maybe Monday we'll do a quick test shoot with the audio setup we're gonna use and see how it sounds.

The shoot's a week from tomorrow!

I thought I was going to be the first one to mention the Jane's Addiction reference, but I see you beat me to it.

Whenever I hear anything about Bundy I'm reminded of that song.

I really like JA; I even scheduled a trip to visit my father in Florida to coincide with the reunion tour appearance in Miami! Perry and the boys (with Flea sitting in at bass) were awesome. Jeez, that must have been about six years ago...