Get your EPU on!

Over at FireDogLake, a brilliantly written political blog widely known for it's relentless search for the truth in the Bush Administration scandals (pick any one of them; trust me, FDL's on the case), there is a curious phenomenon called "getting EPU'd".

This happens in the comments section, whenever an article is posted and anywhere from 50 to 200 messages typically are written, just about everyone leaves and goes to post on the new thread as soon as a new article is posted. Sometimes, a commenter may have crafted a fine response to something upthread, and posts it, only to find that everyone has moved on.

One longtime commenter ("Evil Parallel Universe") had a string of so many late messages that we began referring to the situation as "getting EPU'd". As in, "I'm reposting this comment in this new thread because I got EPU'd."

The other day a few commenters suggested marketing an FireDogLake t-shirt reflecting the phenomenon, which makes it as inside a political blog reference as has come down the pike in years. So, through the magic of Photoshop, here's my concept of the t-shirt: 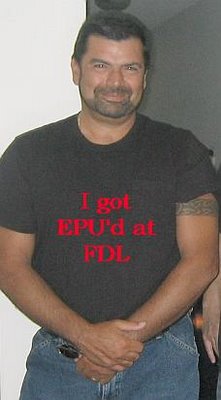 Bush's secretery Condoleezza Rice visited liverpool the other day,went down like a lead baloon,there was a big sign outside the university saying "go home war monger"

Oh, don't worry...you can keep her. She loves going shopping over there anyway.

Is she a native American?

THANK YOU so much for telling me what EPU is! I read FireDogLake regularly, and often read/participate in the comments. And this has been driving me nuts for a few weeks now. I searched all over the Net for this term (electronic power unit, anyone?). Finally I went to Technorati and your post popped up. NOW I get it. Oh, thank you so much.

Hee hee! You're welcome, Madam Deb. Glad I could help.

Just today I FINALLY figured out why Wilson changed his handle to *ilson, right after I saw Edward Teller change his to "Ed*ard Teller".

They took out the frickin' "W", get it? It was driving me crazy, and I was determined to figure it out on my own rather than ask. I'm so proud of myself!

The t-shirt needs the FDL flame icon...as a background for the text I think

"Let everyone sweep in front of his own door, and the whole world will be clean." - Johann Wolfgang von Goeth

I've been EPUd at FDL far too often. I'm used to the Usenet newsgroups, where a given thread can stay alive for weeks, which gives plenty of time to drive each topic into the ground, which is how things should be. ;-)

In this case the comments constitute a tree, wherein each reply is a descendant of the original message or one of the replies, or replies to replies, etc. It's a very simple schme that works very well.

Add me to the list of grateful FDL participants. I finally got curious enough about what it meant to be EPU'd to go looking. I tried Wikipedia first, but found only a gaping void waiting to be filled. Next I searched Google, and bingo, this blog entry was at the top of the list.

So thank you Bob! Great T-shirt idea too. Now I know what to call it when I get EPU'd, and I am that much closer to being 'in-the-know' over at FDL.