Word just in...this so-called "global warming" scare is nothing more than a liberal falsehood that actually has NO effect at all on the climate. Lies, I tells ya, its all LIES!

Yeah, it's fun here in Connecticut right about now. Apparently there's some kind of ungodly low pressure system that's taken up permanant resident status in Greenland, and that pesky counter-clockwise rotation is bringing frigid Arctic air down through the mid-East and into our kitchen. Not to mention all those lovely BLIZZARDS that seem to enjoy getting a free ride on the Alberta Clipper express...and according to the Weather Channel (see last week's post regarding them), it's not going to change until well after the green vomit is hosed off the sidewalks the day after St. Paddy's Day.

Not that I'm complaining mind you...my wife and I actually LOVE living in CT; it's just that this insane weather pattern is perfectly welcome to GIVE US A FUCKIN' BREAK ANY TIME IT DECIDES WE'VE MAYBE HAD ENOUGH! I mean, fer fuck's sake, haven't we had ENOUGH frigid temperatures and snow already? If I ever catch Puxatawny Phil, that goddamned rodent is DEAD MEAT! 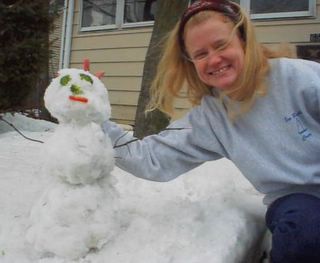 Joyce's Snowdude
Joyce is so cute. She's one of those people who never lost her child-like love of Winter, regardless of the inconveniences it occasionally brings. We'd just finished taking a three-mile walk (where we had to walk in the streets at times because of un-plowed sidewalks) and when we got back, she decided to make a snowman. I just had to take a picture.

Oh, and we did see a large flock of wild green parrots roosting in some trees near the water. Some years ago a couple of parrots escaped in the NY/CT area, and they adapted to our climate and thrived. It's kind of cool to see them flying around the neighborhood all Winter long, squawking like crazy. Kind of reminds me of the Caribbean, except for the frostbite!
Posted by CT Bob at Monday, March 07, 2005