Martha Stewart was tragically killed early today by her pet horse "Cupcake" at her ranch in Bedford, New York. Stewart, released yesterday from the Federal Prison in West Virginia, was feeding her horse garlic-sprinkled scallops wrapped in bacon when the animal became spooked after her dog crept under the fence and bit the horse's tail. The frightened horse then lept over the fence and trampled Ms. Stewart, crushing her skull and breaking her electronic ankle bracelet.

Had she lived, Ms. Stewart would have been in violation of her house arrest for allowing damage to occur to her ankle bracelet resulting in a further five months in federal captivity. 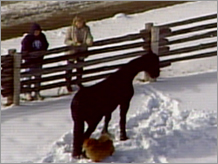 Moments Before The Attack

Ms. Stewart had been enjoying her first day of freedom when she died within the grounds of her fortified compound, after spending nearly five months in federal custody for lying to a grand jury. Had she lived, she almost certainly would have had many opportunities to furthur cheat stockholders and sidestep the SEC with her illegal business deals.

Her favorite horse "Cupcake" was taken into custody and will be charged with involuntary manslaughter.
Posted by CT Bob at Friday, March 04, 2005

*snort* *giggles* *chuckle chuckle* Poor Martha. She will be missed.

I'm sure hell will smell like some sort of potpourri now...

Thanks...I was inspired by that news story yesterday about the chimp that ran wild and savaged it's former owner. I started thinking, "Hmmmm...if there's ANY justice in this world," etc.

From there, it basically wrote itself!