We're getting closer to our student film shoot that starts on Monday.

We began with a lecture on filtering the sound signal to "clean" it from unwanted frequencies. Then we rigged a couple of mics and experimented with various filtering schemes.

To most people, they don't really notice these kinds of things when watching a film. But it's very obvious when a sound mixer doesn't do his job right and some glaringly obvious audio problem takes them right out of the story they were watching and makes them ask, "What the fuck was that awful noise?" when an annoying sound crops up that should have been taken care of in the mix.

Then we broke to visit the wardrobe department, so Chat could instruct the wardrobe trainees about lavaliere placement on actors, and we learned about various costume material from Danajean Cicerchi, who did the Day 5 lecture about wardrobe.

I normally don't worry about wardrobe too much, but there's always been a question that I've pondered now and again, especially after seeing a movie scene with female nudity in it.

The question is, which department is responsible for what is commonly called a "merkin"? Props or Wardrobe? Because really, even though an actress physically wears a merkin, they almost always look adorably like some kind of cute and furry pet, which technically would make it a prop.

Well, a few days earlier when I chatted with Danajean at lunch, she answered that question indirectly (because I didn't have the courage to come right out and ask it) by saying that anything an actor wears is considered wardrobe.

Which immediately spawned the next logical question (which I also failed to ask), "Is there such a job as a "merkin fitter", and if so, who do I have to kill to get it?"

Alas, there's one more career I'll have to add to my list of things I'll likely never become, right after "astronaut" and before "spokesmodel". Such is life. 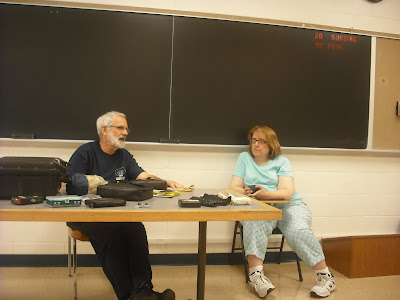 After lunch (where I managed to avoid locking my keys in my car) we dragged the sound cart outside to learn how to deal with intrusive background noise. We set up on the patio right next to the pond with the giant fountain in it, providing a very audible white noise to work with.

Unfortunately, it started to sprinkle, and after hoping it would stop to no avail, we dragged the cart back into the law school lounge area.

So while the World Cup was playing on the lounge TV (goddamn those awful fucking vuvuzelas!) we ran lines on a scene from "Working Girl" (1988) with both actors mic'd with lavs and also boom mic'd.

Well, I'm starting to think that Chat has a sick sense of humor, because the scene called for Harrison Ford and Melanie Griffith to have their awkward wake-up conversation after she got drunk, passed out, and woke up in her underwear in Harrison's bed. Of course, Chat called for guys to play BOTH parts. Twice!

Actually, Chat was proving a point that when doing this sort of work, accuracy to the script's requirements isn't nearly as important as getting the sound levels and techniques right. In theory it makes perfect sense.

Guess who got to read some of Melanie Griffith's lines?

Maybe I should be thanking Chat. There's nothing in the world that cures you of the ability to be embarrassed more than reading Melanie's lines about waking up in her underwear while Harrison leeringly delivers his suggestive lines back at you. And all the while, non-FITP law students wandered in and out of the public area pretty much non-stop. It was a lesson is just how weird the film business can be! 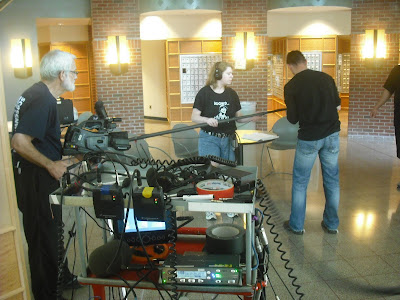 We finished up with our lovely production and went back to class. There, we talked about Pressure Zone Mics (PZMs) and the mysterious Seven Things a Boom Operator Must Know. Which turned out to be about Nine Things, but who's counting? It's all good!

At 5 we were called down to the big hall to pick up our snazzy 2010 FITP T-shirts! Yay, free shirts! This course just keeps gettin' better!