Another interesting day learning loads about the way to successfully make production sound in a film sound great. 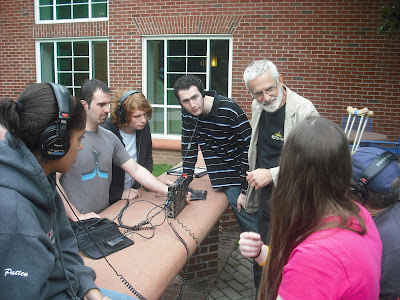 Above, Chat Gunter talks to the class outdoors at Quinnipiac about the use of wireless mic and their useful range. We had to hurry because the weather was threatening! 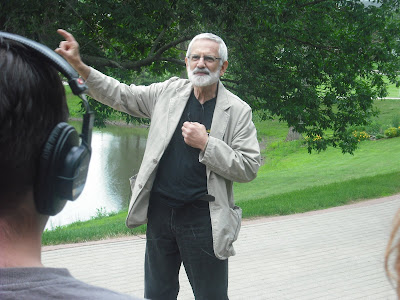 Chat wore a pair of wireless lavalieres and discussed the issues that might crop up on a set when using them. He then demonstrated how to determine the maximum radius of the mics by slowly walking away from us and talking, while we listened to his entertaining monologue.

In another life, I'd almost bet Chat was a comic; he could probably perform somewhere up in the Catskills, with guys like Jackie Mason. He often entertains while he teaches, which is truly a rare gift.

When the mics starting fading out, that was too far to be the usable range, and so we'll make sure the actors didn't go anywhere near that far. There's nine students enrolled in the Sound Dept. class, and we had enough headphones to allow everyone to hear what was going on during the two demonstrations. 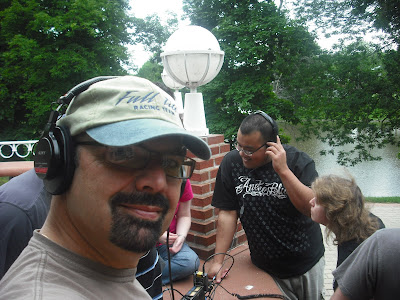 This is me, with the portable mixer just visible at the bottom of the screen.

After it started sprinkling we hauled the equipment back inside, and spent most of the afternoon putting the sound cart together. Basically, a sound cart is a portable sound production studio, with the mixer, digital recorder, video monitor, and a bunch of other important stuff lives when on a shoot. I'll try to get some photos of it tomorrow.

We're about to start doing real production work in class, taping each other in scenes and learning about how to operate the boom. This is getting really fun!