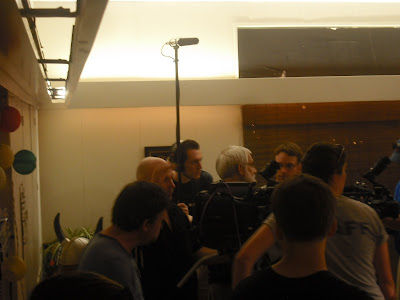 Daniel handles the boom while Chat discusses the scene. 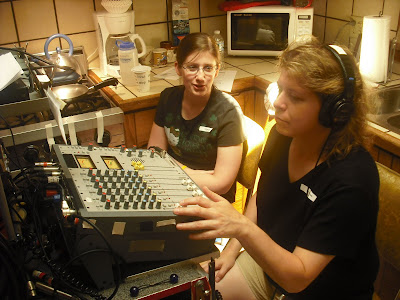 Tracy mixes a scene while Colleen watches. The kitchen is still ridiculously small, and the monitor didn't work because they ran longer cables to get them out of the shot, so everyone who worked the board was mixing "blind". 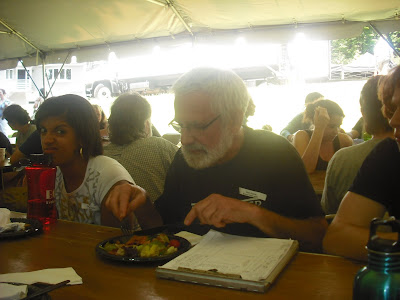 During lunch Chat decided that it would be a good idea to have a Sound Dept. meeting so he could go over strategies to ensure the best chance of success during the shoot. For some reason Samantha has started making goofy faces at me each time I take a picture. She's probably just getting back at me for crossing my eyes at her right before her line during a dramatic scene were acting in together. 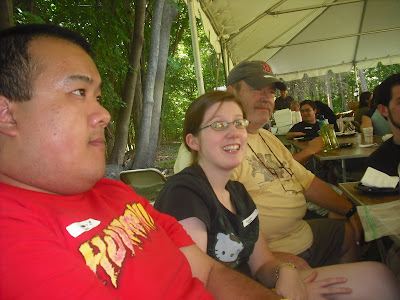 My team members Jon and Colleen listen to Chat, along with Fred who was the boom op for much of this afternoon. When Chat asked if any of us had any suggestions on how he could do a better job, I almost suggested "Maybe you could scream at us a bit more!", but I was worried he wouldn't get the joke and then actually DO it!

It's kind of a running gag, and when some folks from scripts asked how it was working with Chat, I replied, "Oh, he's the bestest and nicest guy you could ever meet! Of course, I'm suffering from Stockholm Syndrome!"

Which is a joke, because we all love and respect Chat and enjoy working with him, and his stories make what could easily be a dry and boring subject into an entertaining learning experience. Yes, he does occasionally let us know when we're behaving in a particularly doltish manner, but then he goes out of his way to explain WHY what we're doing is wrong and the best way to correct it. Plus, he's very generous with praise when it's merited, which makes us all want to do a great job and actually earn that praise.

The reality on a film set is that you need to think and to act in a way that will guarantee a successful production. Any screwing around or inattentiveness is enough to get you tossed out of a job, and possibly blacklisted from getting any other jobs! Chat is making sure we know the lay of the land and avoid the pratfalls that many people take in this business.

And I think he's fuckin' awesome for being a no-bullshit instructor, and I'd highly recommend him for anyone who truly wants to learn the subtleties of this business, even if it doesn't perfectly match whatever romanticized fantasy about working on a film set consists of. 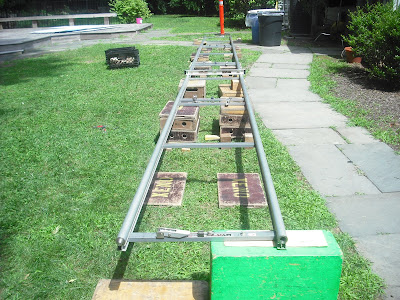 A dolly track for a scene we'll likely shoot tomorrow. The missing apple box in the foreground was pilfered for a scene we were shooting in the house. 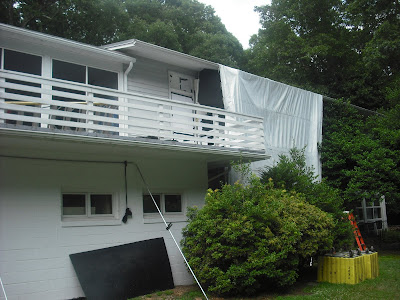 D4N, which is saying "day for night". On our call sheets, the daily schedule given to us the night before (we hope), it shows the interior party scenes as being filmed at night. So a blindingly bright shaft of light beaming into the middle of the set during a supposed nighttime party scene might ruin some of the magic we're creating.

The way to solve it is to screen the windows with black fabric, and in this case also put a weather resistant shield over it. Which is what they're doing on the upper floor windows.

The screened-in room on the three windows on the left is the "video village", a roughly 12x18' space our six non-working (at the moment) sound crew shares with a lot of script supervisors. Who are a fun and jokey bunch, but when I look at the endless amount of paperwork they have to process, it makes me happy that I'm in Sound. 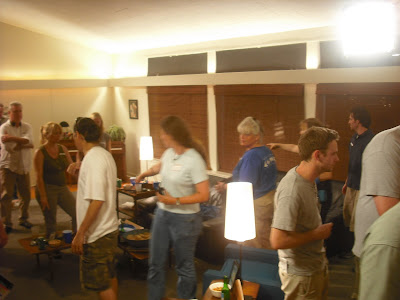 Inside the "controlled chaos" of a location film set. By the end of Day 2, the overheated set was starting to smell like a 1940s era Vic Tanny Gym! 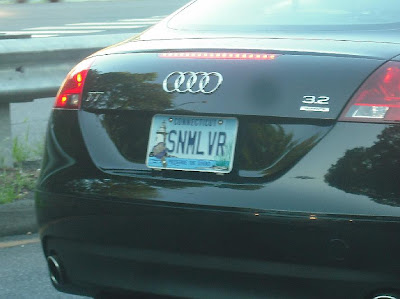 Okay, so I'm always on the lookout for interesting photo-ops when I have my digital camera with me. Here's a license plate I noticed as I turned off on exit 34 of the Connecticut Turnpike.

...on your license plate, even. Hey, something tells me there's some fur-lined cuffs and a riding crop or two in this fella's trunk!

I think in order to convey my new chosen interest, I'll apply for a vanity plate myself. How about this one: