Two days ago, the ad that I placed in New England Film appeared. Today, there are dozens of resumes in front of me! Damn, but that's a good return for a project that doesn't pay anything. Looks like NE Film gets a LOT of hits from actors. 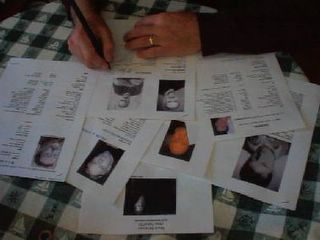 "The Fog Of Casting"

So now I got to read all this stuff...my head is spinning looking at all the credits these guys list! I'm worried I'll make a disastrous mistake and end up with someone who's entirely wrong for the part.

I know...I'll get Anthony to make the decision! Hee-hee

Word of advice -- when making a film with people who are working for free, make sure the food is plentiful and good. They tend to get cranky and bitter and walk off when hungry.

Delegate = passing the buck. That's ok, though. I'd hate to be the one making the decision.

Hi Jane! Thanks for the advice. I'll make sure we take good care of our actors and crew food-wise; we may decide to work with them again at some point. Not only for that reason; I'm learning that the acting community is very close knit in this area. Word would certainly get around if we weren't suitably appreciative of them.

Cherry Moon; to tell you the truth, I was sort of kidding about delegating...I'm much too involved in the project to just hand something like that off solely to my production partner. Besides, judging from the experience on most of the resumes I've received, these guys are WAY over qualified for our amatuerish little production!

(That's not to say that our finished movie won't win any film festivals we enter...hey, I'm nothing if not an optimist!)

Awwww... I knew you were just kidding ;)

I love your blog, btw! I'm glad to have stumbled on over here!