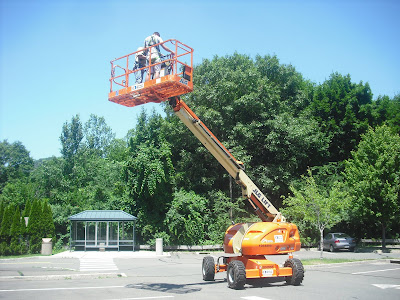 Today was the special Aerial Lift certification course, which is a requirement to get into the union, IATSE Local 52.

While I have no idea if I'll someday join the union, I figured having another certification would be a good thing, especially for the very reasonable $50 fee for the course.

After about an hour-long presentation, we all took a written exam, and then headed out to the off-campus lot where the two lifts were parked. One, pictured above, is called a "boom", and can reach about 40' into the air. The other, which you'll see in the video, is called a "scissors lift", and extends straight up about 20'.

The weather was as nice as could be for today's course. Instructor Adam Drummond commented on how he's run into all sorts of crappy weather in the countless training programs he's run, but today was absolutely perfect. Coupled with a great view of the scenic Quinnipiac Campus, it was awesome.

When I made it onto the boom, I asked Adam if we could extend it up to the maximum height so I could take a photo, to which he readily agreed. The picture didn't do justice to the scene below, but I enjoyed the view anyway so it was cool.

After my foray onto the two lifts, I managed to avoid tipping them over or running into Adam's SUV with them, so I was awarded a Certificate of Completion for OSHA 29 CFR S.1926.453 Aerial Lift Platform (Scissor & Boom). The cert is good for three years, after which I'll have to take the course again to re-certify.

Now you can get a job shooting football practice for the coach's tape!

If it pays decent, I'm totally there!

One should always keep in mind to be very careful when operating heavy equipment such as a scissor lift.

Good post about training to operate lift.. that help to find there work and learn from experiences people is good to learn.. thanks for nice post..